I forgot to say that I hatched up a Tamagotchi Angel the other day, I decided to feature him in the log aswell. He has been doing fine! Nothing much up with him really. Although he has turned into the good teen character, Kodoten

As I promised, here is the little surprise. I was earching around on the internet for Tamagotchi and came across a game in the app store for iOS. It is just like a Digimon although it has got different characters due to Bandai's copyright and it not being a official tamagotchi game. However it is really good. Im already addicted to it! I can't wait till the Tamagotchi L.I.F.E comes out for iPhones, then I will have one for Digimon, and one for Tamagotchi's. Just for all my reader's, I will be logging about him here!

I downloaded the app available on iOS for 69p, It seemed worth the price and I hadn't purchased any app's in a while so I thought that I may as well treat myself. After it installed I clicked on the app. A small egg appeared flashing and bouncing up and down. The pixel's are 16x16 and are really good quality. I will be logging about him with pictures so you can get a better understanding of what the app is like and all of the features that are available. Here is the first photo:

About an hour later, he finally changed. Once again I do not know that characters names sadly. Although as I said, as soon as I find out I will let you guys know. The character's do appear to be cute though and I really am enjoying this game so far. The best thing is, when you exit out of the game, you will receive notifications for when the character need's you. So say if you forgot to turn the light's off when it goes to bed, once you exit out of the app nearly instantly, you will get a reminders telling you that you didn't turn it off. It is then up to you to decide if you are going to turn it off or not. The care you give the Digi will effect what character you will end up with. I have found out that the life span is a maximum of 14 days depending what character you will get. Now for the really cool part:

Just like digimon, you can fight these online, by using the Game Centre (or Center as some people spell it). You can fight with anyone that is online to see who will win. This can effect what character you get as well. You can also battle with someone else who has the app on their iPhone, iPod or iPad by using the bluetooth. I am going to do this because my sister has hatched one up on her iPhone. I won't be logging about her one though, however I will let you know what character she end' up with.

There are two versions of the app available, The Gen 1 or the Gen 2. I am currently running the second generation however tomorrow, I will purchase the first generation and log about that one as well. The first generation also has the names of the characters, plus I have made a growth chart by using the information sent to me by the creator of the game.

My little Digi went to bed shortly after he changed. I wonder what time he will get up. Good night everyone! Stay tuned for the next update
25th February
Angel

Just a quick update. I have been playing around with Angel's clocks. I have made her grow up faster by making her stay awake for longer so that she goes to bed when I do  and wakes up when I do. So finally, she changed about 1 hour ago into Kuriten. Hopefully she won't change into the Angels because the last ones I had got so needy really quickly and it was hard to care for them. I actually did not have time to care for them. That could be the reason why they dead at 15. Anyway that's a good age I suppose. I have got a photo that I will upload now 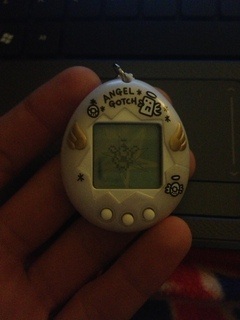 My little Kusatchi decided that he was going to depart today. I am quite sad since he is cute, but is really unhealthy. If only i could find a way of making him last longer and have longer time to bond with me. Anyway I have chosen not to hatch him back up yet.

Digimon decided to evolve this morning. I think he is now a toddler or a teenager. I haven't got just a picture of him on his own today because my iPhone crashed. Luckily he was still alive when I came back to the game! Im happy about that  Nothing much up with him today, although I did battle with my sister's one. We both got the same character too, she is finding it to hard to care for due to her checking her phone constantly but I am enjoying it. 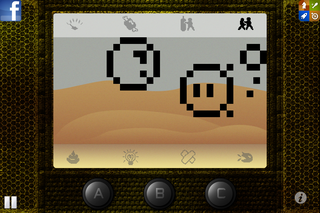 So just under a hour ago I decided to purchase the other generation of digimon. It's the first generation and seems to be just the same as the other one although it has a different game and different characters. It kind of a pain to have to keep switching between them but ah well. They are still really fun and I am enjoying them.
The game is quite hard. You have a bar with lines that quickly go up and up and you have the press the B (middle button) when it is right at the top of the bar to throw a object at the wall to break it down to win. This bring's the training bar up as well for when you are fighting battles. He pulls a sad face if you loose which also is really sweet.

That's all for now guys, Ill post tomorrow if something actually happenes, Until then, goodbye!